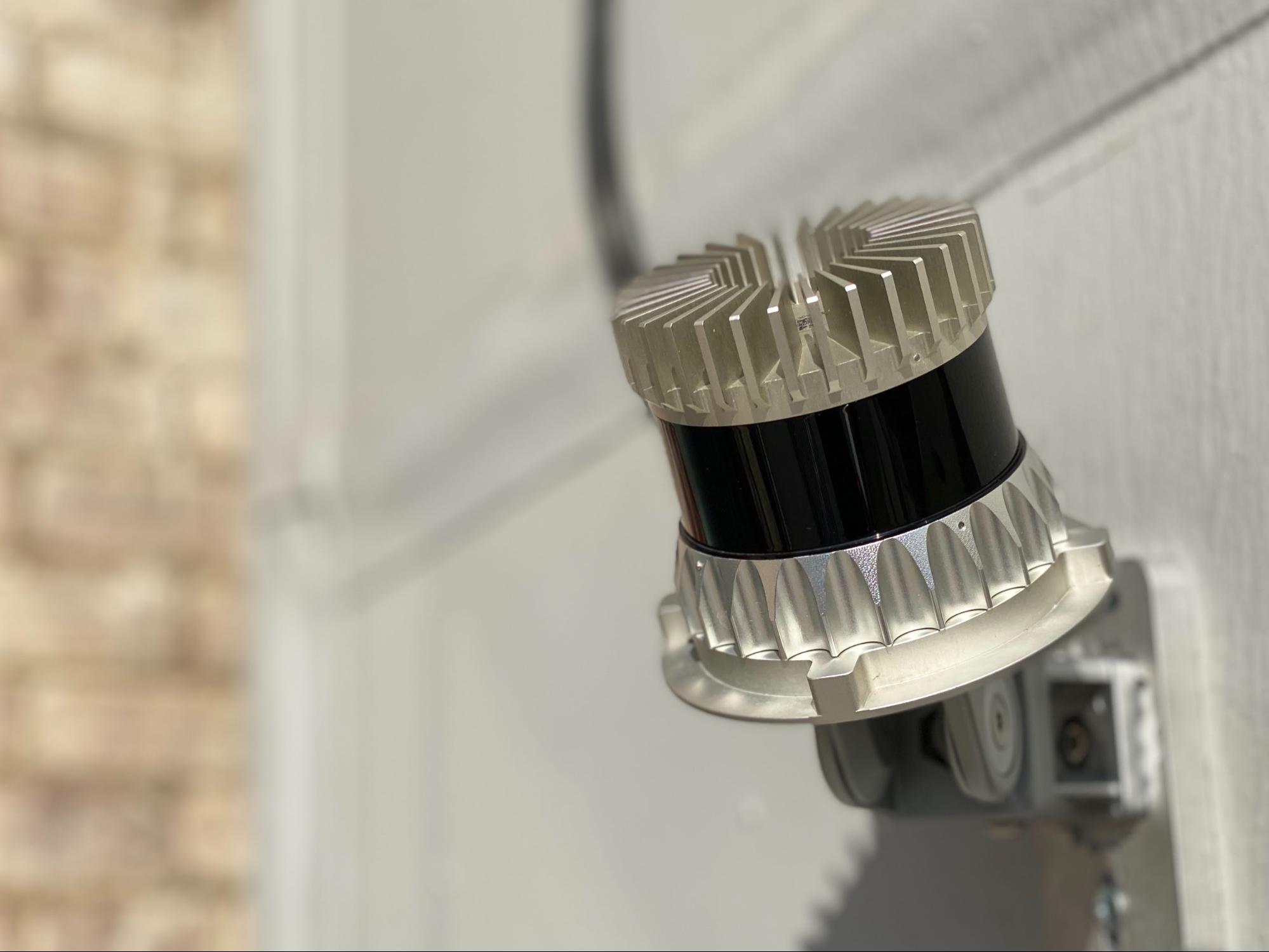 Lidar applications extend to many use cases beyond autonomous vehicles. One of the most exciting of these use cases is building and perimeter security. Lidar cameras deliver a unique combination of real-time 3D perception, night vision, and 360 degree coverage that make them ideal for wide-area perimeter security, intrusion detection, and foot-traffic management.

Current camera-based surveillance systems include a large network of video cameras integrated together to see in multiple directions. These systems struggle with a number of issues:

More advanced systems augment cameras with radar for distance detection, but radar technology does not provide the resolution needed to accurately distinguish individuals in a crowd. When cameras rely on radar for depth perception and radar relies on cameras for resolution, path predictions are often inaccurate, with lots of false positives when the cameras and radar inevitably fall out of perfect co-calibration.

False positives in a security system are false alarms, and require more people to manually monitor and investigate potential alerts.

To give our security customers a complete solution that’s easy to integrate into existing VMS solutions, we’re partnering with software companies to provide object detection, classification, and tracking capabilities. Today we’re excited to highlight our collaboration with Seoul Robotics!

A lidar solution for security

We are working with two leading security software and integration companies to combine the perception power of lidar into traditional and next-generation Video Management Systems (VMS). Seoul Robotics, a leading computer vision company, has built perception software for security systems that combines with Ouster’s high-resolution lidar data with state-of-the-art object detection and tracking algorithms. Tacticaware has built Accur8vision, software for designing, integrating, and implementing an expanded perimetric security solution. With the help of our partners, our lidar-based solution delivers on key needs in the security market:

An OS1-64 can detect and identify a person up to 50 m away, and an OS2 can detect a person from 100 m, in all 360 degrees horizontally. This removes the need for multiple video cameras integrated together with distorted panoramic views.

3D lidar data gives unparalleled spatial accuracy for tracking movement and threat potential. You’ll know exactly where each person is at any given time, how far away they are from zones of interest, and where they’ve been. When using multiple sensors, identified pedestrians are seamlessly passed from sensor to sensor, creating a mesh network of coverage. Use this spatial awareness to reduce false alarms, and trigger the threat response you need.

Unlike cameras, Ouster’s lidar is not affected by lighting conditions and is able to operate exactly the same at night as during the day. It’s also not blinded by direct sunlight or sensitive to malicious sources of light like laser pointers. The invisible but active illumination provided by the lidar enables you to operate discreet night surveillance and reduces the need to invest in flood lighting to maintain visibility.

Our lidar sensors are designed and built to the most aggressive reliability specifications in the world. Our sensors are built to last up to 10 years, and at IP68 and IP69k, they can endure the harshest weather conditions. Lidar active sensing continues even in rain, snow, hail, dust, and fog. We conducted a test with various obscurants on our sensor window to show the minimal effect they have on our data output.

Installing a lidar sensor is as simple as the installation of an IP camera. Our sensors support PoE+ connections and tracking software integrates directly into existing VMS solutions.

Putting it to the test

We mounted an OS1-64 on a tripod and set it up in our building to demonstrate the perimeter and building security application. The software instantly picked up humans and followed their movement around and through the highlighted area of interest.

The Ouster + Seoul Robotics solution recently won an Innovation Award from the Global Security Exchange recognizing this innovative approach to next-generation security solutions, and is on display at ISC East in New York City this week. To learn more,  reach out for a live demo!